B Is For Beirão, Licor Beirão 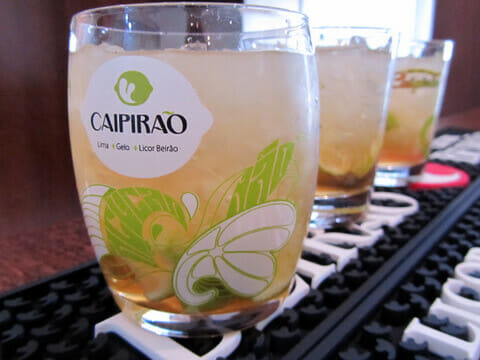 On my very first trip to Lisbon in 2006, I discovered a sweet, herby liqueur and promptly fell in love with it. And with Lisbon, of course.

It took a while to learn the name; I’m a visual language learner and need to see things written down before they stick. Luckily, after several requests for “Beyoo”, “Bayow” and “Bowee”, a bemused waiter realised that I was after Licor Beirão, showed me the bottle and taught me how to say it properly.

At that time, I was living in Venezuela and had to eke out the one bottle of the precious amber liquid that I was allowed to take home. It’s not the reason I moved to Portugal but by happy coincidence, here I am, reunited with Licor Beirão.

Now that I have full access to replacement bottles, I’ve introduced all my friends and visitors to this Portuguese drink and Christmas presents are sorted for fellow fans.

It’s popular among the Portuguese, too.

Look on the shelves in any pasteleria, restaurant or bar in central Portugal and you’ll spot a bottle. I’ve also noticed Licor Beirão stalls cropping up at events around the country such as the honey and chestnut festival in Lousã and the mushroom festival in Alcaide.

The drink has been around for over 150 years so to attract the younger crowd and prevent it from becoming just something your granny drinks, the company invented the ‘Caipirão‘. A twist on the Brazilian cocktail, caipirinha, simply mix Beirão with crushed ice and lime instead of rum. Personally, I like mine straight, on the rocks. If you prefer to fiddle with your drinks, there are more cocktail ideas on the website.

Licor Beirão started life as a medicinal product but when the law changed, it was sold as a liqueur. The present company took over production in 1940 and keeps the recipe well under wraps. Some of the secret aromatic plants and seeds are grown locally, in Lousã. Others are brought in from places like Sri Lanka, Brazil and Turkey for a touch of the exotic.

The company has been in the spotlight recently because of its advertising campaign which presents a tongue in cheek approach to the financial crisis. As well as suggesting the ‘real reason’ why the IMF come here, both Angela Merkel and Nicolas Sarkosy are pictured receiving the ‘best of Portugal’.

I think they’ve got a point. Although I don’t drink it all that often, I still love the stuff and continue to push it to Licor Beirão virgins. I even visited the factory in Lousã to find out how it’s made but I couldn’t persuade the owner to reveal his secret recipe.

What’s your favourite Portuguese tipple? Let me know in the comments.

This post forms part of my personal A-Z of Portugal.