B Is For Brambles And The Battle To Banish Them 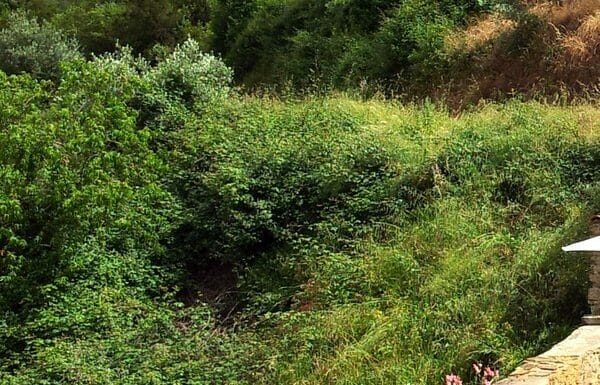 ‘Get rid of brambles’ has been on our To Do List ever since I moved to rural central Portugal. That was almost five years ago. After a long, prickly process, I can finally tick this as done. Well, almost.

Here’s how not to deal with brambles, followed by the easy way of getting rid of them

During my first year of living in Moura Morta, our neighbours told us that we needed to do something about the 2-metre-high mass of brambles that was climbing up the hill and almost over our garden wall. Admittedly, they weren’t very attractive to look at but I had more urgent concerns than a bunch of weeds, no matter how big the bunch.

The neighbours insisted and mentioned the words ‘fire hazard’ so we donned thick clothes, heavy boots and ventured out with a pair of garden shears, a rake and some secateurs. Mike did the cutting and I did the raking and burning.

It was a horrible job; sweaty, painful and scary. Scary because the hill is steep and uneven so we were in constant fear of slipping and tumbling into an abyss of ancient barbs, and partly because I’d never been in charge of a bonfire before. From time to time, the neighbours came to watch us from the track above, bemused by our efforts.

Why didn’t we use chemicals? they asked. Good point. Why didn’t we? After several hours of hard labour we had only managed to clear a strip about a metre wide along the length of our garden wall.

We asked around and bought some evil potion from the Agricultural Cooperative which I was too scared to use.

The brambles grew back but not quite as far as our wall.

The following spring, we went through the same routine of slashing and burning, wishing we could just set fire to the whole hillside and have done with it. Not a good idea when you’re surrounded by eucalyptus forest. We managed to hack a bit further into the tangle of brambles and uncovered an olive tree and a peach tree. Reluctant to let the brambles return, we dug them up by the roots.

It felt like progress and we even toyed with the idea of clearing the ground for some veggies.

Year 3: Ignore them and hope they’ll go away

The veggies didn’t happen but thanks to our digging efforts the year before, the regrowth was minimal. Neither of us was keen to battle the brambles any further into submission so we did nothing that year except squirt them with Round Up. That made the edge of the bramble cloud turn brown but by the following spring, the patch that we’d cleared was claimed by regrowth and the olive tree had disappeared again.

We talked about getting a strimmer but the steep slope was dangerous enough with the thorny brambles let alone a lethal piece of machinery handled by incompetents.

A friend offered to help and spent a couple of hours strimming as far as he dared before the ground seemed to drop off into nothingness. His hard work uncovered the olive tree again and pushed the brambles a little further into retreat.

Having seen how quickly a strimmer could blast through the brambles, we looked into paying someone to get rid of them. I picked up a leaflet for a local forestry management organisation who clear land for a living. Perfect, I thought, and sent them an email.

No response. (This no longer comes as a surprise – see Q is for Quotes)

We found a card for an expat who does that sort of thing. He gave us a quote. We snorted in disbelief. The brambles stayed.

Trouble is, when the wall of brambles is taller than a man, there’s only so far that the spray will reach.

The result? The first metre of the wall of brambles turned brown and there was very little regrowth on the patches that had been cleared in previous years.

After four years, we had only managed to push back the tide of brambles about 5 metres.

There were a lot of forest fires last year. One night, we stood watching anxiously as flames licked down a hillside a couple of kilometres away and the neighbours once again pointed out that our house was surrounded by highly flammable brambles and bushes.

There was nothing we could do about it in the height of summer but we resolved to sort it out before the following summer.

Year 5: Get the professionals in

This time I rang the Associação de Produtos Florestais de Poiares and after about three weeks of postponements (all well-communicated) we woke up one morning to the sound of strimmers.

Mike and I watched in awe as three men waved their machines at the offending vegetation and reduced it to shreds. In less than a day, they had cleared as much of the land as they could get a foothold on, leaving us with a naked hillside.

All we need to do now is pick up the old plastic buckets and other rubbish that had been tossed into the brambles. And spray the surrounding brambles to keep them in retreat.

My advice to anyone with a bramble problem: get the professionals in straight away.

For just over €100 they did more in 4 hours than we managed in 4 years. Worth every cent! Find your local Associação Florestal and if you can’t handle phoning them in Portuguese yourself, find someone to do that for you.

This post is part of my ongoing Personal A to Z of Portugal.

Have you battled the brambles and won? How did you manage it?

2013-04-09
Previous Post: How was your trip to Portugal, Dan and Linda Bibb?
Next Post: Changing Of The Guard Ceremony In Lisbon