D Is For Daisy, Our Rescue Dog 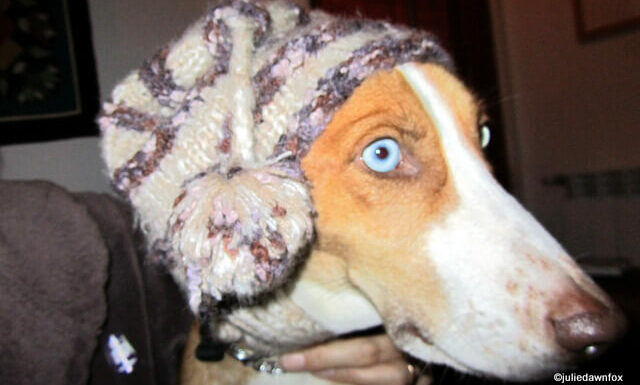 I’d always wanted a dog but never had the lifestyle to commit to looking after one until I settled in Portugal. Having agreed that the time was right for us to adopt a dog, and done a bit of research, Mike and I turned up at the municipal kennels in Coimbra one Tuesday afternoon.

We walked  around the cages, almost deafened by the desperate barking of the dogs clamouring for our attention. Some of the dogs simply sat or lay in their confines and looked sorrowfully up at us as we approached, tails thumping the floor half-heartedly.

Mike fell in love with Daisy’s blue eyes on the spot and she easily won me over by plastering herself to the front of her cage and frantically licking my hands.

Unfortunately, both she and the other dog we had our eye on had already been reserved.

Disappointed, we went home to sulk and scour the blogs for abandoned animals. When I spotted the same blue-eyed puppy we’d just seen listed as available on one of the blogs, I made enquiries. Ana Malho from AGIR Pelos Animais (Action for Animals) confirmed that someone else had chosen her but took my details just in case.

That was on Sunday. On Monday afternoon, I received a phone call at work. Lazuli, as she was known then, was available and did we still want her? Apparently, the woman who originally wanted her was intending to keep her on a chain in the yard all day, a common practice here in Portugal.

Knowing that foreigners tend to be soft on their pets, Ana thought Lazuli would stand a better chance of getting pampered with us. After some frantic form-filling and faxing of documents, our application was approved and the following day we changed her name to Daisy and brought her home.

I’ll never forget the way she went berserk with glee the first time she came into the house. As soon as I let her off the lead, she raced backwards and forwards through the hall from the living room to the kitchen, legs splayed, eyes wild, seemingly unable to believe her luck. She still does this crazy, excited run from time to time but has calmed down a lot since the early days.

I don’t know how many items of clothing we lost to her habit of pulling clothes of the line or clothes horse and ripping holes in them. Luckily, she wasn’t interested in shoes; I have to buy mine in the UK as I can’t find any big enough in Portuguese shops. She’s outgrown this tendency, thankfully, although she never grew as big as we thought she would based on the size of her paws. Just as well, really, as she still sneaks onto my lap at every opportunity.

Daisy’s of ‘indeterminate race’ but looks remarkably like a stocky version of a short-haired grande Portuguese Podengo except that someone (not us!) cut her tail off. Being daft enough to believe that hunting dogs are born with stumpy tails, I only realised what had happened to her when a friend described how some people use elastic bands to dock puppies’ tails.

That was three years ago and she’s matured into a loving, generally obedient dog who makes me laugh every day and gives me an excuse to go for a walk.

This is the latest post in my Personal A-Z of Portugal series.

2012-01-19
Previous Post: C Is For Cabbages… And Other Vegetables (Or Not!)
Next Post: E Is For Eucalyptus Trees In Portugal