I can’t recall how I first found out about Mafra’s Iberian Wolf Recovery Centre but it took me several years to finally get around to visiting. This is the only place in Portugal where you are likely to see these magnificent beasts in anything resembling the wild.

What’s so special about Iberian wolves?

After being persecuted and killed off to the point of near extinction, Iberian wolves are now a protected species in Portugal. Around the size of a German Shepherd dog with brown or yellowish fur, they typically have black marks on their legs and white stripes on their cheeks.

While there are around 300 wolves living in the Peneda-Gerês National Park and a few other locations in Northern Portugal, they have understandably become so wary of humans that you are extremely unlikely to ever see one in those parts.

Not all wolves are capable of surviving in the wild and this sanctuary has saved several lives. Some of the 13 current residents were rescued from illegal captivity, others have come from zoos in Spain and Portugal and some were born in the Iberian Wolf Recovery Centre.

What to expect when you visit the Iberian Wolf Recovery Centre

When you book the visit, and again at the start of the tour, the staff stress that there are no guarantees that you will actually see a wolf. We were, of course, still hopeful. 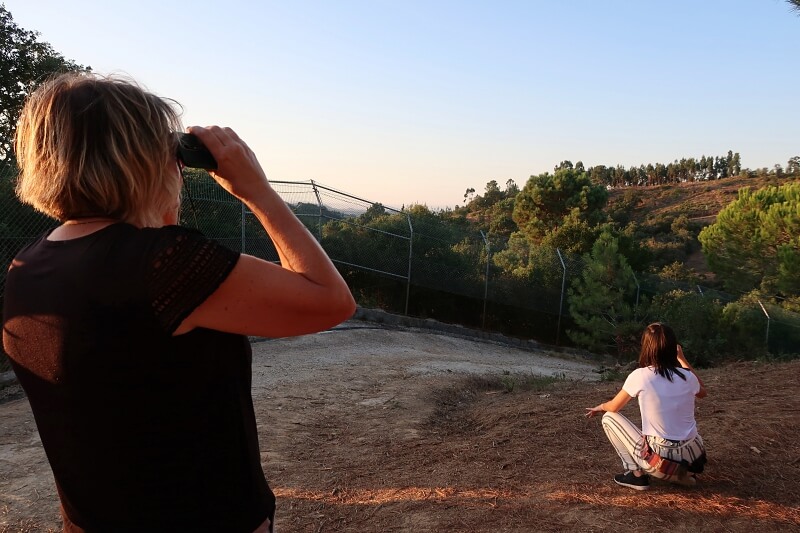 Wolves live in packs and are extremely territorial so the 13 residents are divided between 5 or 6 enclosures on the 17-hectare estate. These spaces are intended to provide the animals with as close an approximation to their natural habitat as possible, with minimal human intervention. You need to be quiet to avoid scaring the wolves, who are naturally wary.

The tour takes you around the perimeter fences of the wolf enclosures on a dirt track so wear sensible shoes. If you have a pair of binoculars, bring them with you – the centre has some you can use but you’d have to share.

After passing the first two enclosures without spotting any wolves, I was starting to think that we were out of luck. The scenery is attractive so it’s a pleasant and educational walk but of course we were all there in the hope of actually seeing a wolf or two.

We were not to be disappointed. Sara signalled us to be quiet and pointed out one of the older inhabitants who was lying under a bush near the fence. Having spent most of his life in Madrid Zoo, Furco is not too bothered about humans staring at him and is quite happy to bask in the sun.

Once we’d all had a good look at Furco, we carried on along the trail until once again, Sara asked us to be quiet – we were in for a rare treat in the form of Arga, a typically elusive wolf, in the enclosure ahead.

She soon disappeared from view so we continued our walk through the woods until once again, Sara indicated that there was a wolf in sight. This was Faia, who was born in the Recovery Centre in 2008.

Having volunteered at the centre for several years, Sara could tell from Faia’s behaviour that she was likely to howl. To howl, a wolf needs to expose its throat, which makes it extremely vulnerable, so this is something they will only do when they feel secure.

We waited in silence, with bated breath, and were rewarded by Faia’s voice. For us, it was the icing on the cake of an already special experience.

Staffed by volunteers, the centre is open to the public on Saturdays, Sundays and public holidays.

Guided visits are offered twice a day when open although only the second visit is in both English and Portuguese:

Location on Google Maps – note that the last stretch of road is in poor condition.

How you can support the wolf sanctuary

You can adopt any of the 13 resident wolves on an annual or lifelong (adoação vitalício) basis. Information about the wolves and contact details for arranging the adoption (in Portuguese but you can use Google Translate if necessary) on this page.

If you’d like to make a financial donation towards the upkeep of the wolves, you’ll find the bank details on this page.

The reception centre also has wolf-related souvenirs on sale. Last time I checked, the online shop (Loja) was still a work in progress.

If you live nearby, you may wish to find out more about volunteering at the centre, in which case you should email crloboiberico@ciencias.ulisboa.pt for more information.

2018-12-16
Previous Post: 10 Diverse Things To See And Do In Portugal’s Silver Coast Area
Next Post: Where To Find The Best Views In Porto