Lisbon Through the Eyes of a Cinema-Lover

Some things have changed since I first fell in love with Lisbon in 2007 yet many of its charms are timeless. David Kintore’s book, Silver Screen Cities, Celebrating City Cinema Going – Lisbon is essentially the diary of a film-loving TEFL teacher living in Lisbon in the early 1990s, back in the days of escudos and years before the Euro and the much celebrated Parque das Nações existed.

I’m not especially interested in film but the cinematic element of the book is balanced by observations of daily life in various Lisbon neighbourhoods and I was curious to find out what has changed in the last 20-odd years.

I needed no imagination to picture the snippets of Lisbon life he describes such as the shoe shine man, balconies “groaning under the weight of potted plants” or the chestnut sellers at the foot of the Gloria elevator, “…a turn of the century funicular tram trundling through smoke drifting up from chestnut vendors’ charcoal fires, an evening of mist and mystery”.

They’re still there, just as they have been for decades before.

Kintore describes Lisbon’s antique wooden trams and the #28 route with affection, enabling me to relive the journey up the hill to Graça, past São Vicente da Fora monastery with views of tiled houses, washing lines and palm trees. The flea market (a.k.a. Feira da Ladra) behind São Vicente church and monastery is still going strong on Tuesdays and Saturdays, selling the same random collection of curious, but largely useless, items. It’s worth a wander and Graça itself is a charming neighbourhood, of the faded glory variety, with a few little parks and a fantastic view from the miradouro (belvedere).

Note: These and other Lisbon attractions are covered in more detail in this post

You could say this about most city parks in Portugal, both then and now, “…boisterous card games are going on amongst knots of old men in flat caps sitting around green tables, playing away in the winter sunshine.”. Here, Kintore is describing one of my favourite parks at Principe Real where the sprawling yew tree he mentions still provides welcome shade in summer months.

The Estufa Fria (Greenhouse) at the top of Parque Eduardo VII was open during David’s time in Lisbon and has reopened twice since I’ve been living in Portugal. It was, and still is, an oasis of foliage, ponds, grottos, paths and bird life in which to escape the heat and noise of the city for a while.

Kintore lived on the other side of the River Tagus on the Costa da Caparica, catching the ferry to Lisbon when lured by friends, football or films. He paints an uninspiring picture of Trafraria, a fishing village dwarfed by an industrial complex with more than its fair share of stray dogs, from where the ferry leaves for grandiose Belém.

In contrast, the scene which greets him across the river is of clean, green, open spaces and magnificent structures such as the Discovery Monument. David came here several times to watch films but although it remains a popular tourist attraction, the cinema has long since closed.

Kintore’s film reviews convey his deep passion for cinema. But much more than this, they evoke a sense of place with descriptions of the cinemas themselves and the audience’s behaviour and reactions, all part of the cinema-going experience. Each review begins or ends with a tale of the journey and his surroundings, plus the delights and disappointments and real life characters that spice up his own story.

“I sink into my orange seat between grey canyon walls and anticipate the film, savouring the thrill of expectation that accompanies the moment when the vast golden Condes curtain starts to rise.”

Other cinemas he frequented have since changed use. The São Jorge Cinema on Avenida da Liberdade is now a cultural centre with a programme of theatre, music and international film festivals. Although Kintore used to venture behind the pink Art Deco façade of the Eden Theatre in Praça das Restauradores to watch films, it is now home to a complex of tourist apartments. 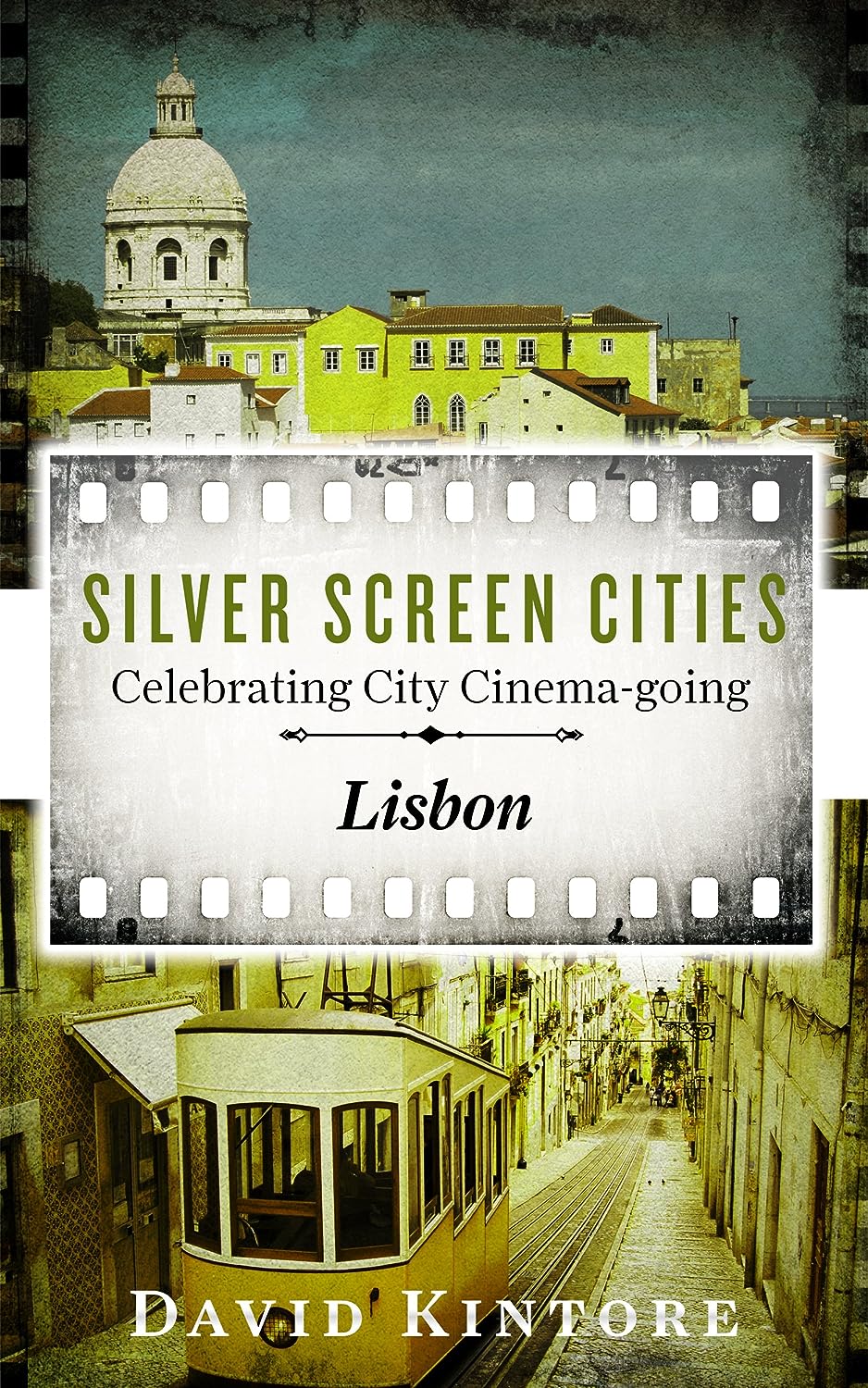 What I enjoyed most about this book is how much I can relate to it as a fellow English teacher and Lisbon lover. The scenes of everyday life and observations of places I’ve been to, or would now like to visit, make it worth reading as an under-the-skin insight into a non-touristy Lisbon that’s still valid today.

Each chapter is a travelogue based around one cinema-going experience. As such, the book could have benefited from tighter editing to remove one or two repetitions but these are easily dismissed.

I’ve seen very few of the films he critiques but recognise and respect his reviews of the ones I have. Although I admit to skipping over many of the descriptions of plots and portrayals, after reading about some of Cecille B. DeMille’s movies I’m tempted to give them a go.

Overall, its a fascinating peek into Lisbon life peppered with perceptive film reviews.

Disclosure: This post is brought to you in part by David Kintore, author of Silver Screen Cities, Celebrating City Cinema Going – Lisbon. This hasn’t influenced my opinion or description of the book.