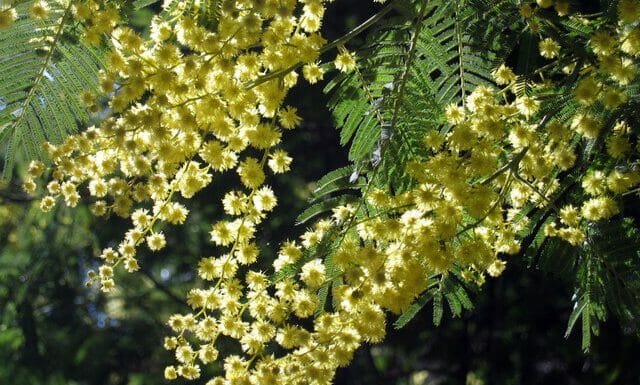 It’s mid-February and the mimosa trees are about to blossom, signalling the start of Portuguese spring in my eyes. Pretty soon, the hills around me will be covered with bright yellow splodges, as though someone has dipped a sponge in yellow paint and dabbed the landscape. Already, the mimosa trees seem to be covered in a furry yellow mould as the buds begin to open.

In another week, clouds of tiny yellow puff-ball flowers will dominate the silver-green feathery leaves underneath them. My drive into Coimbra will be studded with lemon-coloured trees. One of my walking routes will take me through a golden arch formed from the mimosas that grow either side of the track.

Mimosa as an invasive species

I’d never heard of or seen mimosa, aka Acacia dealbata, before I came to live in Portugal. Now that I’m here, there’s no escaping it. Much as I love the delicate, unusual flowers, I can see why this species has become a serious problem in this country.

Mimosa was first introduced to Portugal from Australia over a hundred years ago precisely because it’s so pretty. Before people realised the damage it could do, it was even cultivated and used to help prevent soil erosion.

It readily adapted to conditions in Portugal and grows extremely quickly, producing lots of seeds. The trouble is, Mimosa grows so well that it’s taken over and destroyed a lot of the natural plant life.

It’s also a bugger to get rid of once it’s established. If you don’t destroy all of the roots, you’ll just make the problem worse as new shoots will sprout up all over the place.

Mimosa is probably the most aggressive invasive species of tree in Portugal. It’s become such a problem that it’s now against the law to cultivate it, sell it, or keep it for ornamental purposes. So bang goes my idea of digging some young plants up and growing them in pots in the garden.

In some areas of the country, groups of school children and volunteers go out into the forests to pull up the saplings by the roots to try and prevent the mimosa population from getting any bigger.

Mimosa, however, isn’t giving up the fight easily.

Once the yellow flowers have come and gone, they are replaced by thousands of seed pods which dangle from the branches. These pods mature from pea green to a rusty brown then fall to the ground, creating a crinkly copper carpet.

Each pod contains about eight tiny black seeds so it’s no wonder that each year, new seedlings appear and take over disused forest tracks or fill any gaps between existing trees.

So it looks as though the start of spring in Portugal will continue to be heralded by sprays of yellow for many years to come. If you want to see this for yourself, you need to be in Portugal around February to mid-March.