Lisbon’s National Pantheon Has More To See Than Celebrity Tombs

Lisbon National Pantheon was not on my original list of things to see and do while in Lisbon, although it is now. I visited this monument simply because I was practically on its doorstep after visiting the São Vicente da Fora Monastery (another pleasant surprise) and thought I might as well pop in.

To say it’s impressive is a serious understatement, especially if you like inlaid marble patterns and domed ceilings. Classical music plays in the background and echoes of conversations reverberate around the enormous building. I can imagine how powerful the sound must be when they have choirs singing.

The former church of Santa Engrácia is a suitably grand resting place for the likes of Amália Rodrigues, the much-loved Queen of Fado who is still greatly missed if the flowers surrounding her tomb are anything to go by.

Her remains are in good company with former presidents and writers and the cenotaphs of Luís Camões, Portugal’s answer to Shakespeare, celebrated explorer Vasco de Gama, and Pedro Álvares Cabral, the man who ‘discovered’ Brazil, among others.

To be honest, I was more interested in admiring the floor-to-ceiling marble in patterns of pink, gold, grey, black and beige than the famous names.

If you do visit the National Pantheon, make sure you go upstairs to get the bird’s eye view of the patterned floor. After that, go through the small door onto the rooftop for 360º views of Lisbon and the River Tagus.

Trust me, it’s worth the climb.

The National Pantheon (Panteão Nacional) is open from 10 am to 5 pm (6 pm from April to September) every day except Mondays and some major holidays. Standard entrance is 4 euros but it’s free on Sundays until 2 pm or at any time with the Lisbon Card.

You’ll find it behind Igreja São Vicente in Graça. Take the tram 28 uphill and get off when you see the brown sign for Feira da Ladra (the Flea Market, which is on Tuesdays and Saturdays). Go down the alley at the side of the church and head towards the domed roof of the Pantheon.

Want more suggestions for things to see and do in Lisbon? Try this post: 6 Of My Favourite Lisbon Museums

Still looking for accommodation in Lisbon?

Click to read about which Lisbon neighbourhoods make the best bases.

Pin this for later! 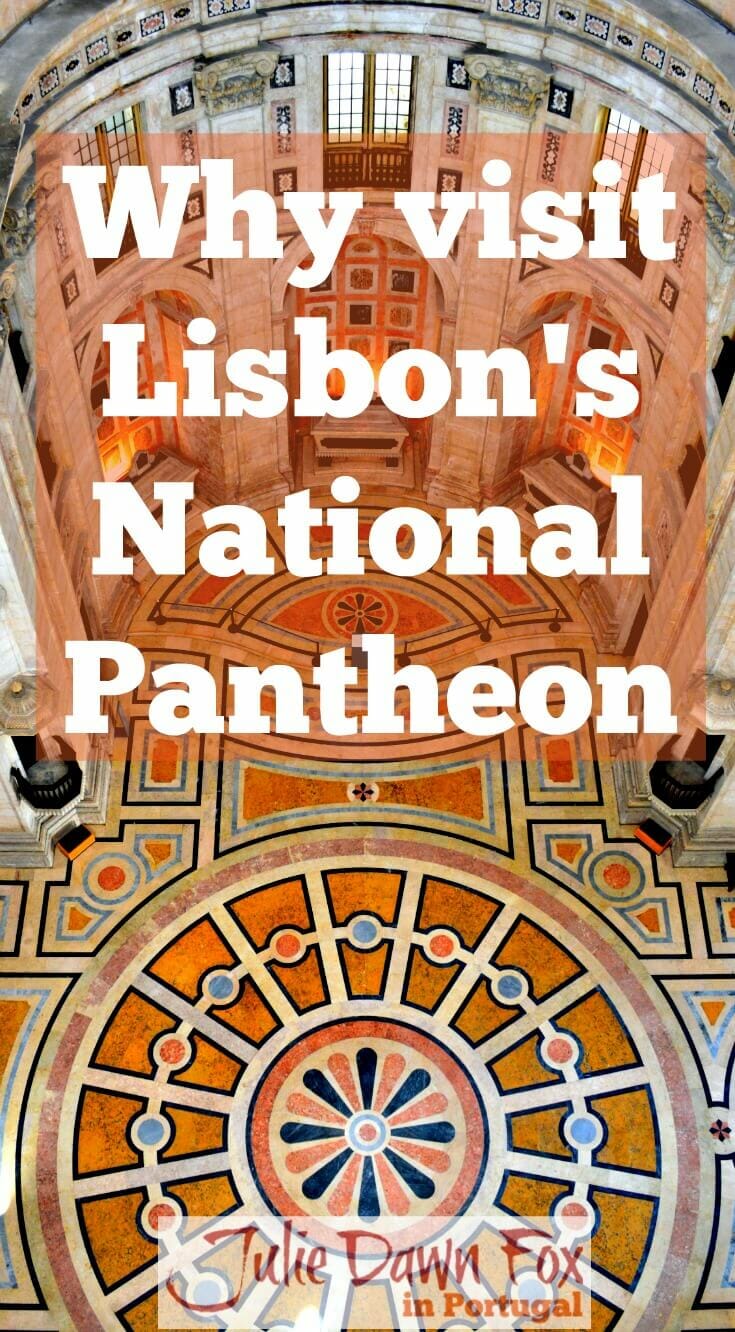