Changing Of The Guard Ceremony In Lisbon 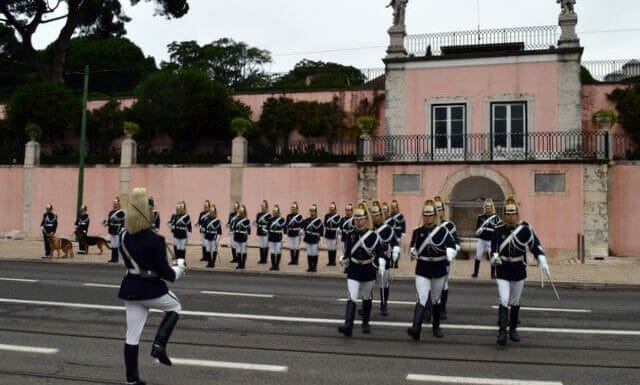 I arrived in Belém one Sunday morning, curious as to why the roads had been blocked off and crowds were lining the pavement opposite the pink walls of Belém Palace. As I got closer, the navy uniforms of the brass band and the showier costumes of the stern-faced national guards made me suspect that I was about to witness the changing of the guard ceremony in Lisbon. I was right.

The ritual began back in 1910 when the Portuguese monarchy were ousted and Portugal became a republic. It involves a lot of choreographed marching and serious faces on the part of the guards on foot, accompanied by the music of the brass band.

Once the men on the ground have done their bit and swapped places, the cavalry ride in from the direction of the Jeronimos Monastery on their white and grey Lusitano horses. The first group of riders carry instruments and simultaneously show off their musical skills and horsemanship. One rider had a very fidgety horse but managed to keep playing and prevent his horse from bounding off.

The horseback band is followed by another group of guards on horseback. These guys brandish shiny swords and stare hard at their standing colleagues as they ride past.

It started to rain before the ceremony completely ended but I’d seen most of it so I headed off to the National Coach Museum for cover.

If you want to catch the changing of the guards in Lisbon, be in Belém before 11 am on the 3rd Sunday of the month.

See more in Things To Do In Belem

Find out more about what to do in Lisbon, including Belem.

2013-04-12
Previous Post: B Is For Brambles And The Battle To Banish Them
Next Post: Why The Roman Ruins Of Conimbriga Are Worth Visiting