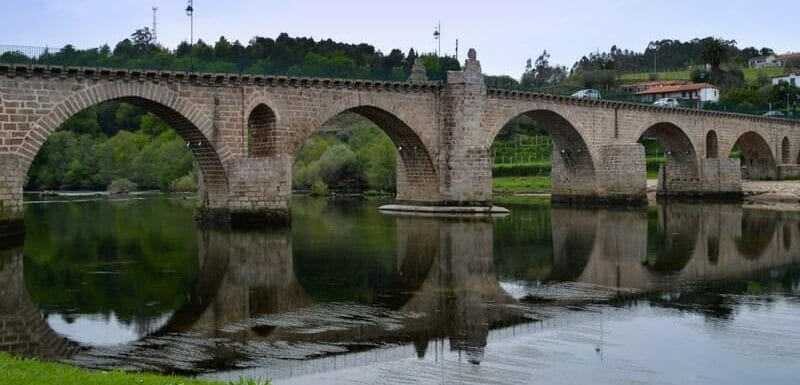 You might have heard of Ferdinand Magellan, the Portuguese navigator who proved once and for all that the Earth is round. In Portugal, he’s known by his real name, Fernão Magalhães, and although no one can say with absolute certainty, it’s likely that he’s from the quaint town of Ponte da Barca. There’s plenty of evidence that his family were well established nobles in the area, enough to qualify him for the Lima Valley Giants Route at any rate.

Born in 1480, Magalhães was killed by natives in the Phillipines at the age of 41. Before his untimely demise, he managed not only to circumnavigate the globe, but also to navigate a passage from the Atlantic to the Pacific Ocean via the Strait of Magellan. His achievements were of such importance that he’s had many other things named after him including clouds, lunar and Martian craters and penguins. Pastelaria Liz (Rua António José Pereira, 64) in Ponte da Barca has even created a special boat-shaped cake, complete with sails, in his honour.

I explored the Ponte da Barca section of the Lima Valley Giants Route in the company of José Augusto Azevedo from CENTER and Luís Fernandes from Nature 4 to find out what the town was like during Magalhães’ era. We started at the 15th century bridge, built to replace the barge that used to transport pilgrims and locals across the Lima and gave Ponte da Barca its name (ponte means bridge and barca means barge).

As we wandered through the small town, we spotted the Magalhães family crest incorporated into a coat of arms on Capela da Nossa Senhora da Lapa. Although the Rococo façade of the nearby Igreja da Misericordia (Mercy Church) is clearly the work of 19th century interventions, it was built in the late 16th century.

Not far from the church, a Roman road leads to a tiny stone bridge that’s been used to cross the River Vade since Roman times. It was improved during the middle ages but what you see now is pretty much what Fernão Magalhães would have seen.

Back in those days, the land around Ponte da Barca was controlled by three important monasteries and Castelo da Nóbrega, which belonged to the Magalhães family. The castle lost its strategic importance when Lindoso castle was built and the stones from it were removed to build a family home, Paço de Vedro Magalhães. Even though there is no castle left to see nowadays, the site was one of the highlights of the entire Lima Valley Giants Route for me.

The 360° view from the boulder-littered peak is spectacular and extends across the Peneda Gerês National Park into Spain as well as providing uninhibited vistas of the surrounding Lima valley as far as the coast at Viana do Castelo. It’s possible to drive most of the way up the hill to Castelo da Nóbrega but some parts of the cobbled road have been washed away so you’ll either have to walk the last stretch or go by 4×4. From the top, you can make out some of the numerous trails for hiking, mountain biking, horse riding and 4×4 driving, all of which can be arranged through local tour operators.

Of the three monasteries in the vicinity of Castelo da Nóbrega, I visited two. If you only have time to visit one monastery, make it Mosteiro de Bravães, a surprisingly small building at the side of the N203, about 3 km from Ponte da Barca. It’s a wonderful example of Portuguese Romanesque architecture, trimmed with wonderful granite sculptures from the 12th and 13th century. I was lucky enough to arrive just as mass ended (around 6 pm, I think) and was able to go inside to see the frescoes which were added in 1510.

It’s possible to walk from Bravães to Mosteiro de Crasto via Castelo da Nóbrega, about a 10 km walk. Bear in mind that this includes two steep hills in the middle if you’re thinking of doing it.

Mosteiro de Crasto, unlike the one in Bravães, has been heavily adulterated over the years. As with many things that are now considered worthy of preserving for their beauty or historical significance, it was viewed with more practical eyes in the past and sections of it have been moved and badly damaged. Although it lacks many of the original architectural features, the current priest has gone to considerable efforts and expense to improve the monastery and restore its contents, including a 14th century statue of Jesus that now looks brand new and an Our Lady of Agony with moveable limbs.

You’ll need to arrange for someone to open up if you want to look inside any of the monasteries – it’s easiest to do this through Nature 4 or another local tour operator.

More to see and do in and around Ponte da Barca

I’ve already mentioned some of the vast range of outdoor activities that are available if you want to make the most of the natural beauty of the area as well as delving into its history. If you’re not interested in hiking or biking into the mountains, there are other options that don’t involve steep hills including canoeing down the river or following the ecovia, a walking and cycle path which runs from just outside Ponte da Barca along the River Lima to Viana do Castelo.

If you’re coming from Mosteiro de Bravães on the N203, look out for the Galp petrol station in Gandra. Next to it, there’s a cute little house called Casa das Bichas, one of the oldest in the north of Portugal. The first king of Portugal’s mother slept there but that claim to fame wasn’t enough to prevent it being abandoned and eventually obliterated by weeds. It was only rediscovered when the land was being cleared to make way for the petrol station and although it desperately needs an injection of cash and TLC, it’s still charming.

If you continue down the side road to Carvalhal Cais, the former river port that connected the area with Ponte de Lima and beyond, you’ll find the start of the ecovia that leads into Ponte da Barca. There’s a simple river beach here if you’d rather just relax for a while. Alternatively, you can wait until you get back to Ponte da Barca and enjoy the riverside park area.

The Minho region is rich in local crafts and produce, some of which you can watch being made at the Centro de Exposições e Venda de Produtos Regionais in the centre of Ponte da Barca (open daily from 14:30 to 17:30).  The Arts and Crafts Centre is staffed by local artisans who make good use of their time there by making new items to sell, which means you can watch as they work or chat to them directly. It’s a good place to buy one of the embroidered love handkerchiefs but allow yourself plenty of time to choose. Of the many other crafts on display, one that I hadn’t seen anywhere else (except in Arcos de Valdevez) is dolls made from the leaves that protect cobs of maize.

Where to stay in Ponte da Barca

I didn’t actually stay overnight in Ponte da Barca but there are several accommodation options in and around the town.