Exactly how far north or inland the Silver Coast, or Costa da Prata, of Portugal extends is debatable so for the purposes of this article, I’ll concentrate on the things to see and do around Caldas da Rainha, Òbidos, Alcobaça and Nazaré.

As a beautiful, green, agriculturally rich area of Central Portugal with gorgeous beaches, ancient and interesting towns and villages and activities ranging from wine tasting in windmills to stand-up paddling (SUP) in a lagoon, its hardly surprising that many foreigners are attracted to Portugal’s Silver Coast as a place to spend their holidays or even to relocate to.

In no particular order, here are just 10 of the great things to see and do in the Silver Coast. Feel free to add your suggestions in the comments.

Whether you dare to walk along the uneven citadel walls or content yourself with a stroll through the central cobbled streets, the picturesque village of Óbidos will charm you.

It does attract tour buses but you only need to venture one or two streets away from Rua Direita to escape other visitors.

Many of the day trips from Lisbon into central Portugal include a stop in Óbidos as well as some of the other places mentioned in this article.

This one by Cooltour Lisbon may suit you.  Get 5% off with my code: FOX5 There’s a special box at the end of the booking form to enter the code.

If not, click on any of these tours for more details.

Powered by GetYourGuide. Become a partner.

If you’re prone to seasickness, or have a phobia of birds, Berlenga shouldn’t be on your itinerary. This nature reserve island belongs to the seagulls and other creatures that thrive here. We humans can enjoy wildflower walks, boat trips to visit the caves and snorkelling, as well as an offshore fortress.

Day trips to Berlenga from Lisbon include time in the fishing town of Peniche (see #8 below).

The unique micro climates of the Silver Coast mean there are several wine regions within this area, which is good news if you fancy touring a winery and doing a spot of wine tasting.

Special experiences include wine tasting in a windmill and an original brandy distillery in the 18th century family-run Quinta do Sanguinhal.

Once popular for its curative thermal waters, Caldas da Rainha is better known these days for its ceramic production. You can get a broad understanding and appreciation of local ceramics at the quirky Museu da Cerámica or visit the famous Bordallo Pinheiro museum and shop.

Visit Caldas on a weekday morning and you’ll catch the colourful flower, fruit and vegetable market in Praça da República.

Afterwards, you could take a stroll around the pretty Dom Carlos I Park, have a picnic amid the trees or hire a rowing boat to spend time on its lake. 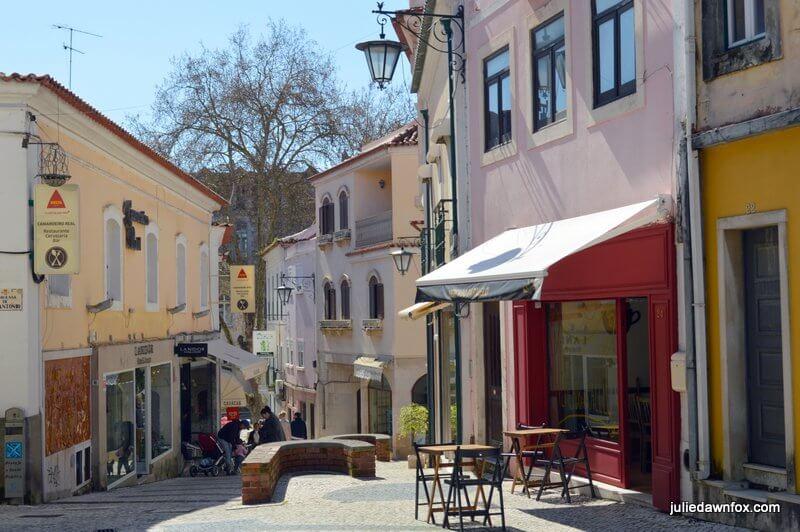 5. Alcobaça and its World Heritage monastery

The historical centre of Alcobaça is dominated by the 12th century Cistercian monastery which is now a UNESCO World Heritage site. Not only is the architecture stunning, it contains two of the most important tombs in Portugal, those of its beloved star crossed lovers, Pedro and Inês.

The town centre holds other points of interest, such as a folk museum and a wine museum as well as intriguing squares. See my Alcobaça post for more details. 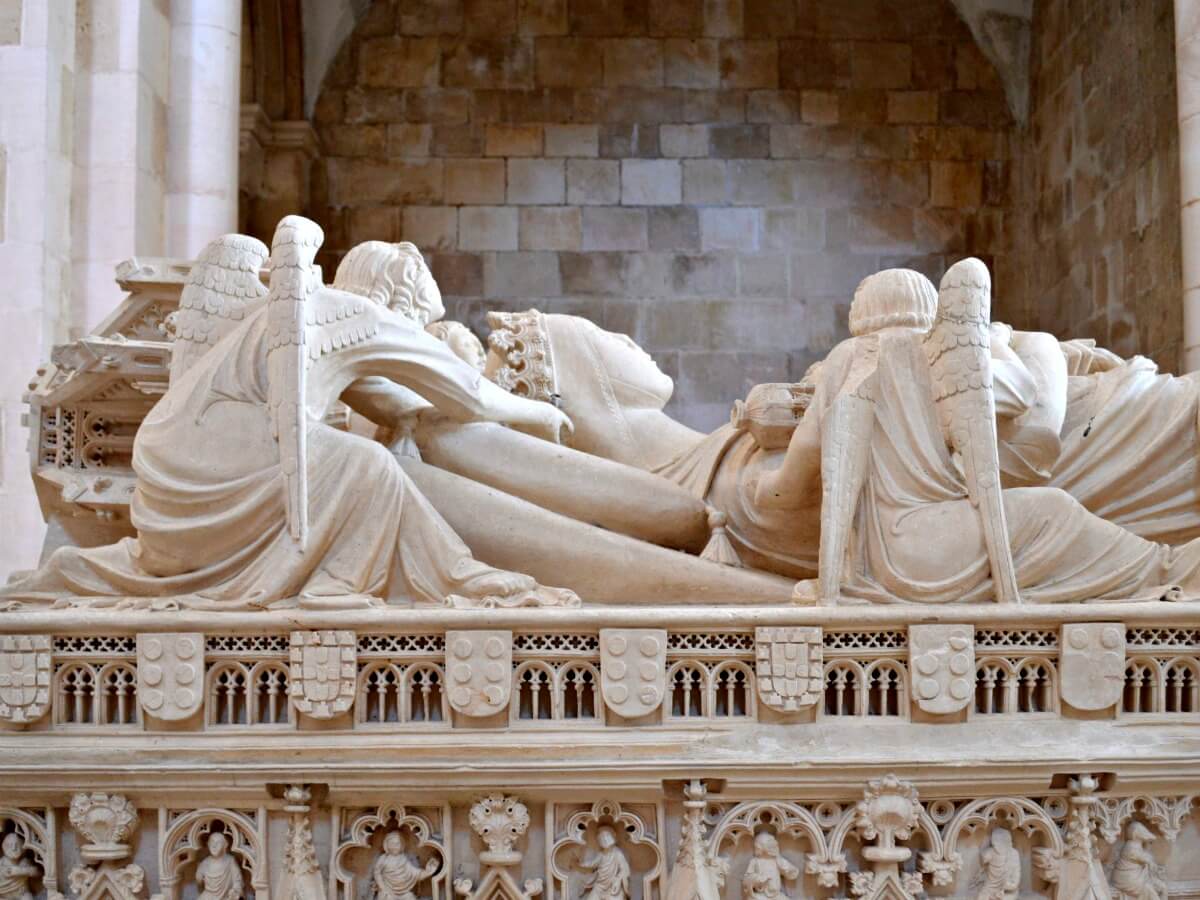 Not being a fan of cold water or waves, except to look at, one of my favourite beaches in Portugal is the one at Foz do Arelho lagoon. While you’re perfectly welcome to brave the elements on the ocean-front beach, I’d recommend sticking to the calm, slightly warmer water in the lagoon.

The surrounding cliffs and countryside as well as a string of beach bars and restaurants add to the appeal.

If you like gigantic sculptures, especially those of an oriental, African or contemporary nature, Buddha Eden is worth a visit.

Owned by the Berardo Foundation, it offers yet another opportunity to share the vast art collection with the public as well as wines from the adjacent Quinta dos Loridos and other wineries in the Bacalhôa group, such as the one in Azeitão.

If you’re going to Berlenga island, you’ll set off from Peniche but even if you’re staying on the mainland, Peniche is worth a stop.

The fortress was used as a political prison during the Salazar dictatorship and currently houses a museum with a collection of local boats and bobbin lace. By visiting the museum, you also get the chance to visit the cells and visiting room of the prison. Plans have been approved to transform this space into a national museum for the fight for freedom and democracy.

The marina and fishing harbour are hives of activity and the nearby beaches are popular with surfers and families.

Have you ever wondered how a country like Portugal, which has long, hot summers and relatively mild winters created ice in the days before electricity? I admit, I hadn’t given it much thought until I visited the Royal Ice Factory in the Montejunto mountains north of Lisbon.

It gets bitterly cold up here in the winter so they built shallow pools for collecting and freezing water overnight. The resulting ice was cut into blocks and stored in an underground silo which kept the ice frozen until it was time to transport it overnight by ox cart and boat to the royal court, trendy cafés and select stores in Lisbon in the 18th century so that the wealthy elites could enjoy their fashionably cold drinks and ice cream.

There’s a surprising amount of information in English here and a few marked walking trails nearby.

I confess that I have yet to understand the draw of Nazaré, unless you’re a surfer looking for ginormous waves. There is a massive sandy beach in front of the town, which attracts families in summer months and you can still see multi-skirted women drying and selling fish, or peanuts and other snacks from beach side stalls. It just feels like a victim of tourism to me.

Sítio, however, I get. This is a suburb of Nazaré, perched on the cliff with spectacular views of the beach and town. You can either drive up or take the funicular. There are souvenir shops and stalls here, too.

The tiny domed chapel, Ermida da Memória, was built to honour the legendary intervention by Our Lady of Nazaré in preventing local nobleman Dom Faus Roupinho and his horse from careering off the cliff while in pursuit of a deer back in the 12th century.

Silver Coast Portugal – Where is it?

Portugal’s Costa de Prata is not just about the coastline; it extends many kilometres inland from the agricultural lands of Torres Vedras northwards. Maps and websites differ when it comes to its northern limits – just take a look at all the different ‘maps’ of the Silver Coast and you’ll see what I mean.

Some claim it ends near Figueira da Foz while others say it continues as far as Vila Nova de Gaia on the south bank of the Douro River. In my mind, it refers to the area around Peniche, Óbidos, Caldas da Rainha, São Martinho do Porto, Alcobaça, Nazaré and possibly up to Leiria and Pombal but I wouldn’t argue with anyone who wants to add the moniker to the beaches between Figueira da Foz and Porto.

HANDY TRAVEL RESOURCES FOR YOUR TRIP TO PORTUGAL
Use these quick links to make your dream trip a reality:

Reserve a room on Booking.com

Get a great deal with Rentalcars.com

Get a quote for travel insurance with World Nomads

Shop for my favourite travel essentials via my Amazon Storefront

As an Amazon Associate I earn from qualifying purchases.

2018-12-04
Previous Post: Why Go To Peniche If You’re Not A Surfer?
Next Post: Visiting The Iberian Wolf Recovery Centre Near Mafra