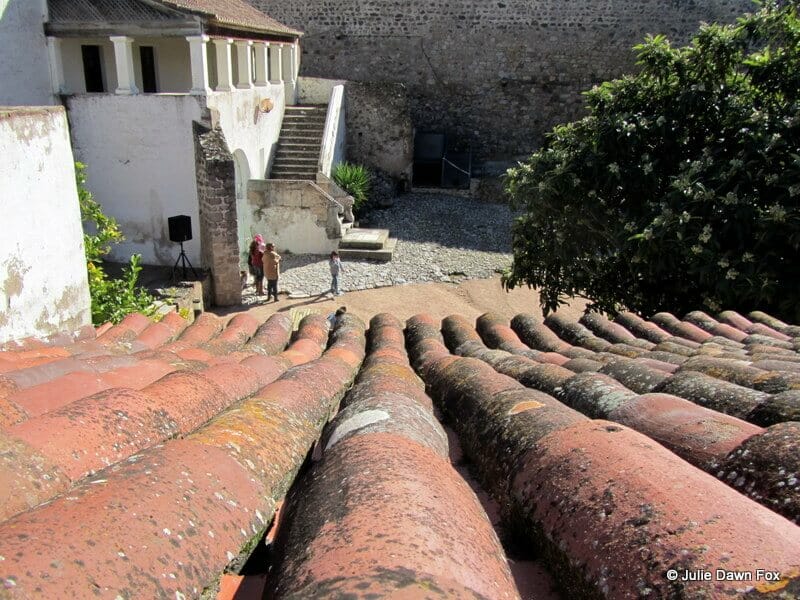 You might be wondering what on earth thigh tiles are. If you come to Portugal and look at the roofs of older buildings, chances are you’ll see some. They’re the long, curved terracotta or clay tiles that were once made by hand. And leg.

If you look closely at an old roof, you’ll notice that the tiles aren’t uniform in size and curvature like the modern, mass-produced barrel tiles. That’s because they were shaped on someone’s thigh!

While some people have short fat legs, others have long slim ones or medium, muscular thighs, which explains why there’s such a range of differently shaped tiles and why they’re wider at one end than the other.

Fortunately, because of the way they are laid in alternate troughs and peaks, this isn’t usually a problem. The finished roof may not be perfectly straight and regular but it won’t leak and has its own unique charm.

Not all of these so-called thigh tiles were made on human legs and are therefore more uniform in shape. As I learned on a visit to the pottery museum in Redondo, some traditional tile factories used logs or bars to form the clay.

The tiles from our old barn roof are too long for my own thigh and I’m quite tall compared to a lot of Portuguese people so I suspect they were moulded around a log, not a leg.

This post gets me one step closer to completing my Personal A to Z of Portugal.

2013-11-15
Previous Post: Sortelha, One Of The Best Historical Villages In Portugal
Next Post: Carved Wooden Cattle Yokes Are A Beautiful Portuguese Tradition