The Princess Of The Dão’s Facelift: Santa Comba Dão 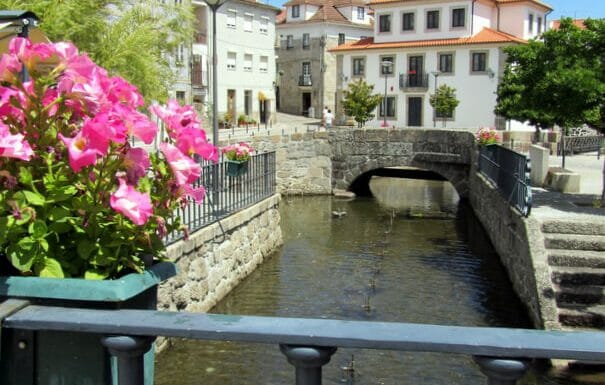 The rejuvenating properties of white cement are noticeable in the lakeside town of Santa Comba Dão (aka the ‘Princess of the Dão) in central Portugal.

Like botox for buildings, the cement has been used extensively to smooth out the deep gaps that had formed between the granite blocks of traditional buildings. The rough stones are now boldly outlined in white, creating a lace-like effect around the smaller ones and a dramatic background for the chunkier ones.

I stroll downhill along granite-cobbled streets and admire the variety of buildings dating back to medieval times that have been left to the pigeons, painstakingly restored or cleverly modernised. By the time I reach the central square, Largo Municipal, I’m struck by the civic pride that is evident throughout Santa Comba Dão. And the cabbages!

In the square, three flags flutter outside the pristine town hall building and there is a sunken map of the Santa Comba Dão municipality with lights marking the points of interest. A message by Lauro Gonçalves engraved into the wall next to it translates as:

The remembrance of its past – its history – is the bond which guarantees an evolutionary struggle for modernisation.

The beauty and charms of its landscapes earned it, in times gone by, the nickname ‘Princess of the Dão’.

Welcome to this municipality – of friendly and hospitable people.“

The few people around on this particular day seem to be gathered at one of the Municipal Square’s outdoor cafés and it’s hard to say how hospitable they might be. The waitress is very friendly though. Two coiffured ladies of a certain age, nothing short of immaculately turned out and dripping with chunky gold, big shades chat animatedly over their tiny cups of coffee. A multi-generational family group catch up on gossip while the children play on the thick granite steps to the stream that runs through the square.

A little boy, about three years old, squeals in excitement and disgust as his investigations under the water with a stick reward him a clump of slimy gunge. His female companions (sisters?) recoil in girlish horror, which spurs him on to prod and poke about some more.

There are little fountains in the stream, not spurting at the moment, that lead to the tiny bridge that could be Roman or possibly medieval; no one really knows. Wooden walkways with pots of petunias have been built to pretty up the waterway, creating a pleasant place for a stroll. There’s even a theme park for ducks complete with climbing frame and Wendy house.

The water in the central sections of the stream looks clean but further downstream, a greasy, grimy scum is trapped in one of the layers, possibly due to the few remaining women who still do their laundry in the stream at the communal stone washboards. At the end of the walkway, the now milky water splashes over a gigantic boulder into a smaller stream below and onwards to the river Dão, one of Portugal’s wine-producing regions.

Not far from here, I find a viewpoint (miradouro). The view over the expanse of lake created by the Aguieira Dam is somewhat spoiled by the swathes of plastic covering the repair work being carried out on one of the major bridges but I manage to ‘PhotoShop’ this from my mind and concentrate on the wiggly fingers of land that creep into the calm blue water, creating countless small bays.

One of these natural bays is home to Senhora da Ribeira river beach, which looks enticing on photos, but my attempts to find it on my way home are in vain. I can’t find it on this map of the area either but I know it exists. More signs might help – local authority, please take note.

There are no major sights in Santa Comba Dão but it’s a pleasant place to spend an afternoon, and you could easily spend a few relaxing days exploring the surrounding countryside to find out why it was dubbed the ‘Princess of the Dão’. She and her people continue to take pride in her appearance so why not go and admire her natural beauty.

2012-03-13
Previous Post: Keeping It In The Family: Casa De Sezim Manor House Hotel, Guimarães
Next Post: Getting Quotes For Construction Or Other Work In Portugal