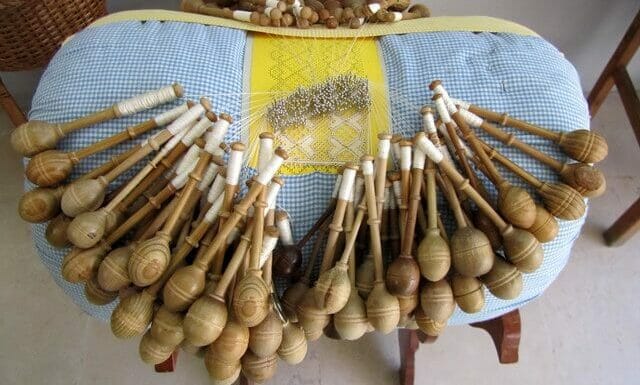 Although lace isn’t necessarily a fabric I jump at the chance of wearing, there’s no escaping the fact that it takes great skill to create and can be truly beautiful and surprisingly versatile.

During a trip to Vila do Conde to visit the national craft fair, I learned a lot about the importance of bobbin lace to the city as well as how it’s made. At the Rendas de Bilros (Bobbin Lace) stand, the lace jewellery, tablecloths, doilies and curtains were being casually tended by a lace-maker.

Head slightly bent, her deft hands tossed a collection of wooden bobbins from side to side, skillfully winding the thread around the many pins marking out the pattern on a padded cushion. The gentle clacking sound of colliding bobbins accompanied her work.

I watched for a while, mesmerised by her dexterity and with a new respect for the skill involved in making lace.

At the other side of the tented stand, a group of primary age schoolgirls had just finished a lace-making workshop and after they left, I stopped to inspect their handiwork. An unfinished giraffe outlined in bright pink was still pinned to one of the cushions. We all have to start somewhere.

If you don’t fancy tossing bobbins around yourself, there are usually a couple of ladies busy working away on their latest piece so you can see a live demonstration of their skills. The museum also has several black and white photographs of girls hard at work in the original lace-making school in Vila do Conde, established in 1919.

There’s an interesting collection of foreign cushions and bobbins and some intricate paper patterns. Most impressive, from my perspective, were the examples of finished lace work, including a wedding dress.

The history of bobbin lace making in Vila do Conde

The lace industry in Vila do Conde can be traced back to 1616 and was an important source of income for the area in the 18th century, despite King João’s attempts to ban the material from the general public mid-century.

Outraged at his new law, and fearful of losing their livelihoods, the lace-makers petitioned against it and within two years, the king had reversed his decision.

The industrialised textile production of the 20th century saw a rapid decline in the lace-making industry. By 1979, there were only 100 elderly lace-makers left in the city compared to over 500 less than 40 years earlier.

Thanks to the annual craft fair I mentioned earlier, which started in 1978, the establishment of a local handicraft centre and introduction of contests, the art of lace-making has been rescued from certain death.

Local respect for the tradition and the hard-working women who spent their days making lace while their husbands were out at sea is embodied in a sculpture by Ilidio Fontes at Cais das Lavanderias (The Laundry Quay).

Vila do Conde by no means had the monopoly on this craft – another centre of lace production in Portugal is the fishing town of Peniche.

Similarly, this was a craft that kept local women occupied and earning while their menfolk were at sea, or if they never made it home. You’ll find a marble sculpture paying homage to their work on Rua Alexandre Herculano.

When I visited Peniche, the municipal museum had a lace making section but this is currently closed fr renovations. A new museum, dedicated to the craft of bobbin lace making, has since opened and is supposed to be well worth a visit.