Cozido À Portuguesa? Not For Me, Thank You! 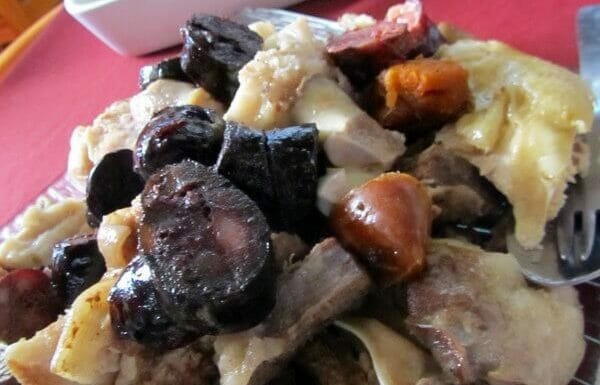 Imagine a huge vat of animal parts, some identifiable as trotters and ears, others more of a knobbly, fatty mystery. Add some cabbage, carrots and boiled potatoes swimming in a murky liquid and you’ve pretty much got cozido à Portuguesa, or Portuguese stew.

It’s much loved in Portugal, especially for Sunday lunch, but I won’t be having it again if I can help it.

Given that I’m the sort of person who cuts every scrap of fat off my meat before putting it anywhere near my mouth, it’s quite remarkable that I’ve been persuaded not once, but twice to pay good money for this popular dish.

Admittedly, the first time I tried it, I did find enough lean lumps of meat on my plate to make it worthwhile and I can’t deny that the vegetables and broth were tasty.

Perhaps that’s why, when I was disappointed to find that my favourite octopus dish wasn’t on the menu, I caved in and agreed to go for the day’s special, cozido à Portuguesa.

I’m no expert on the way that cozido à Portuguesa is usually served but I wasn’t expecting the key ingredients to arrive on separate dishes. I since learned that this is a fairly common way of serving this dish.

On one plate, we got a mountain of fatty bones, three types of sausages, a chicken breast, two pig’s trotters some sliced ear and some chunks of other meat that could have been goat, beef or pork; or all three. The vegetables came in another dish and rice in another.

With a little bit of tentative poking, I was able to find more than enough lean meat to fill me up and Mike was quite happy to discover a rib or two hidden within the mound of flesh, fat and gristle.

Despite our best efforts, we ended up taking home enough bones and scrag ends to keep Daisy happy for a week and still left behind a pile of fat and morcela, the Portuguese version of black pudding which I think would be a bit too rich for the dog.

The recipe varies but you can find versions of this meaty Portuguese stew all over the country.

If you want to.

Personally, I’ve had my fill and will be keeping my fingers crossed that the octopus is back on the menu next time I go back to that restaurant.

Find out which Portuguese food I love in this post.