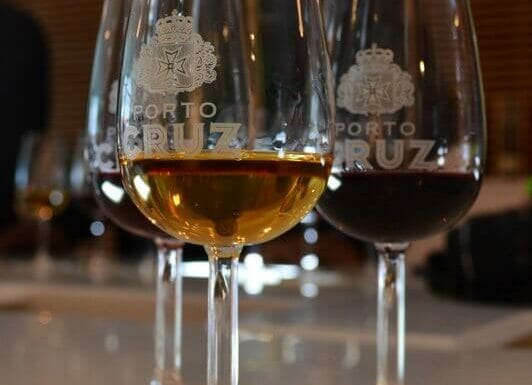 If you’re travelling to Porto, the chances are you’ll be trying some of Portugal’s delicious port wine during your stay. I’ve been to many port wine establishments in the city over the years, most of them fairly similar in their approach and all enjoyable.

My two most memorable port wine experiences were poles apart, though. One very shiny and modern, the other heavily steeped in tradition and history. Both well worth a visit.

It makes sense to start by telling you about Real Companhia Velha (a.k.a. Royal Oporto), established in 1756 by royal charter as one of the first official port wine producers in the newly demarcated and regulated wine region of the Douro valley.

Wine from four of the Douro’s vineyards is transported to the cellars in Vila Nova de Gaia to be fortified with aguardente (grape spirit) and aged in wooden barrels for at least three years. In most cases, the longer the ageing process, the better the port. One of their barrels contains port wine from the 1867 harvest which is bottled by special request and currently sells for around 1000 euros a bottle.

If you pay for a tour of the cellars, you’ll have the option of watching a video about the Douro region (which I would skip if I were you, especially if you are going to Porto Cruz, my other recommendation). Visitors are then shown around the rows of stacked barrels and massive wooden vats in the dark, cool cellars. The guide gathers the group at various points for a brief explanation of the wine-making process and the different types of port wine.

The main reason for making the trek all the way uphill to Real Companhia Velha as opposed to the other port cellars nearer the river is its Vintage Museum. It’s well worth the extra few euros to step into the labyrinth of walls lined with bottles which have been in situ for centuries. The bottles are almost obliterated by thick cobwebs coated in black dust and at the end of one corridor, there’s a bottle of the oldest port in the museum dating back to 1765.

The tour ends with a tasting session so you get to try out some of the different varieties of port. The more you pay, the better the wine you’ll taste. And of course, you can always buy some to take home with you. You’ll have to pay extra for it but the 20-year-old tawny is definitely worth tasting.

Once you’ve had your fill of the traditional, sombre atmosphere at Real Companhia Velha, head down to the riverfront (take the tourist train or a taxi) to Espaço Porto Cruz for a completely different port wine experience.

A brand new concept and space

The walls of the building may be centuries old but everything inside Espaço Porto Cruz is modern and stylish. The brand have adopted the mysterious ‘Woman in Black’ as their theme. The black dress she is wearing in the reception area was created by the Portuguese fashion designer, Ana Salazar and the building’s interior design echoes the curves of the female form.

Architecture aside, I was particularly impressed with the tasting room with its long white table and special lights and glasses to help you see, as well as taste, the qualities of each type of port. The tasting is accompanied by a presentation about the Douro wine region and the different grapes and varieties of port. Some of the information you will have heard already if you did the Real Compania Velha tour but I find the information sinks in a little deeper each time I hear it. They do a special tasting session for kids on Sunday mornings with a simplified presentation and grape juice.

Before you get to the tasting stage, you have the opportunity to watch a couple of videos in the very swanky auditorium. In this case, I’d go for it. The first film follows the story of a young boy who decides to make his own wine and goes through each step of the process on a miniature scale, bringing the making of port wine to life in an engaging, if slightly twee, way.

The second film is black and white footage of the rabelo boatmen who used to brave the rapids and rocks of the River Douro to transport the wine from the vineyards to the cellars. There are more short films in the Douro Valley Room as well as contemporary art exhibitions and a big slab of the rusty-looking schist rock in which the Douro vineyards thrive.

One of the best things about Espaço Porto Cruz, however, is its rooftop bar. It’s the perfect spot for sundowners, or watching the rabelo regatta while sipping one of their signature port cocktails. The food at the restaurant is rather special, too.

Real Companhia Velha is at Rua Azevedo Magalhães 314, 4430-022 Vila Nova de Gaia. The touristy Porto City Train stops right outside if you can bear its fado music. The cellars are open for tours from 10 am to 7 pm daily from June to September, from 10 am to 5 pm Mondays to Saturdays in April, May and October and from 10 am to 5 pm, Mondays to Fridays between November and March. Tours and tastings in 5 different languages cost from 3 euros to 15 euros and take an hour in total.

Espaço Porto Cruz is at Largo Miguel Bombarda, 23, 4400 – 222 Vila Nova de Gaia. You can walk across the Dom Luís bridge from Porto or take a bus or taxi if you’re feeling less energetic. A guided visit will cost you 2.50 euros and tastings are 5 euros, available daily from 11 am until 6 pm. The bar and restaurant are open later and the whole building is closed on Mondays. If you want chocolate or cheese to pair with your port tasting, you’ll need to email ahead to arrange it.

Have you tried port wine yet? Which do you prefer: ruby, tawny, white or rosé?

2013-07-24
Previous Post: An Interview With The Sheldrakes, Expat Artists In The Algarve
Next Post: Why The Gulbenkian Museum, Art Gallery & Garden Is One Of Lisbon’s Highlights