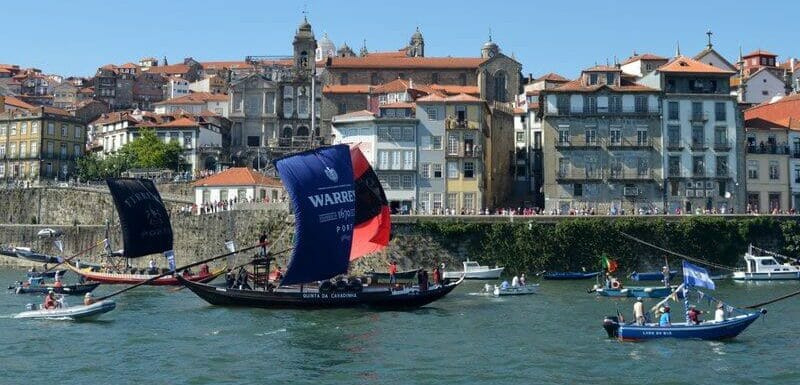 One of Porto’s claims to fame is its port wine, a fortified wine that comes from the grapes of the Douro valley. If you look across the river from anywhere in the city, you’ll see the names of the biggest brands emblazoned on the red roofs of the port wine cellars in Vila Nova de Gaia.

Once a year, you can also see these famous names like Croft, Porto Cruz and Real Companhia Velha sailing down the river in a regatta. Crowds of people lined the river banks to see the race but I was lucky enough to be invited onto a VIP cruise ship to watch it.

As our cruiser approached the marina, the coloured sails of the rabelos, came into view. These wooden boats were once used to transport barrels of wine from the valley vineyards to the city. Teams of men would brave the rapids and rocks of the river to bring the wine to the cellars where it would be fortified with aguardente and aged in wooden barrels to create port.

That day, around twenty rabelos were spread across the mouth of the Douro, waiting to race each other down to Porto’s Ribeira. Speedboats full of bronzed bodies zipped between them and their support boats.

Almost imperceptibly, the sails came closer, making their way down the river towards the city. Our cruiser moved ahead, leading the way to the Dom Luís bridge.

From the start of the race, the black sail of the Cockburn’s rabelo led the pack, coursing down the left bank of the river like a renegade pirate ship.

Its two closest rivals stayed close together in the middle of the river, so close at one point that I thought they were going to crash. They untangled themselves and caught up with the lead boat but they weren’t fast enough to overtake.

The boats don’t move particularly fast but on the cruiser there was a gentle bubbling of excitement and friendly rivalry between port lodges. A self-appointed commentator kept us informed of the progress and I imagine the same happens on the ground, too.

The rabelo regatta takes place annually on 24th June, the day after Porto parties all night in honour of São João. If you happen to be in Porto at that time of year, the race starts at around 4pm and finishes around 5pm at Ribeira. Make sure you have appropriate weather protection, i.e.  hats and sun cream, or arrive early to nab a shady position under the Arrabida bridge or along the grassy banks in Vila Nova de Gaia.

Alternatively, head to the rooftop terrace bar of Porto Cruz and enjoy a port cocktail while you watch the race unfold, unless you’re lucky enough to wangle a place on a boat, of course.

Do you know of any other regattas worth watching in Portugal? Please share it in the comments if you do.

2013-07-01
Previous Post: How was your trip to Portugal, Selena Jones?
Next Post: An Interview With The Sheldrakes, Expat Artists In The Algarve