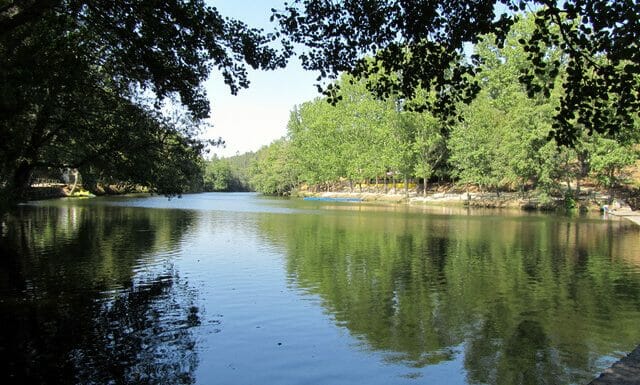 The river Alva flows more or less past our house in Moura Morta. Unfortunately, even in August it’s so cold that your feet turn blue and start to hurt after more than a minute in its waters so while it’s great for cooling beers in, there’s no chance that I’ll be swimming in it.

Assuming that this iciness was an inherent feature of this particular river, I’d been avoiding its river beaches in favour of those on the banks of the Ceira and Mondego. Imagine my surprise, and delight, to find that the Alva doesn’t have to be this way.

I made this thrilling discovery at Cascalheira river beach near Secarias, Arganil.  On one side of the river, imported sand coats the terraced slope of the river bank. Wooden benches and slate seats are scattered between the mature beech trees. I share the beach with a family; grandparents and father smile indulgently at the youngest member as he squeals excitedly and shows off in his Winnie the Pooh armbands.

Aside from this, the overriding sounds are the rhythmic sawing of crickets and the wobble and tumble of water over rocks. An occasional breeze ruffles the leaves, making a sound like waves being dragged over shingle. In the distance, I can just about make out the faint thud and weak warble of the café radio.

Further upstream, past the café and the blue plastic floating jetty, groups of fishermen have congregated. Their lines are like strings of sunlight as they wait for a nibble. As I swim, water boatmen rest on the surface of the water and dragonflies hover just above.

A gnarled concrete walkway, about a metre wide, extends out from each side of the river, capping a dam. In the middle, an ankle-deep gap allows the water to flow over the dam and create a waterfall. There’s no avoiding wet feet if you want to cross.

On this side of the river, there’s plenty to keep visitors occupied including another café, lime green pedaloes and canoes for hire and a riverside path. Heading away from the river, a rough track snakes upwards through eucalyptus forest, which overlooks a well-maintained picnic area with covered cooking / washing up area.

I’m more interested in peering through the window holes of the ruined stone cottage as I clamber down to sit on the rounded grey rocks that poke through the water in the shade of a tree.

Once there, curiosity gets the better of me and I grope my way along the dripping, moss-covered wall of the dam, gingerly finding my footing on the slimy underwater rocks. Most are smooth but my tentative explorations find some jagged, sharp edges that could do some serious damage.

I want to sit under the waterfall so I’m thrilled to find a perfectly placed stone to sit on at the edge of the plunging water while manoeuvring myself into optimum position. What could be better than a free hydro massage with the view downriver of an old stone bridge and distant hazy mountains?

Take exit 13 from the A1 to join the IP3 towards Viseu / Coimbra. Take exit 13 again for the IC6, direction Covilhã/Oliveira do Hospital/Arganil. Follow the signs to Arganil along the N342. From Arganil, continue on the N342 towards Côja. After about 3.5 kilometres, there’s a small roundabout. Take the second exit, EN337 direction Mouronho, and look out for the brown ‘praia fluvial’ sign on the right. GPS coordinates: 40º14 56.19N 08º02 09.12W

Have you got a favourite river beach? Please share it with us in the comments.

2011-09-29
Previous Post: Why I Enjoy Living In Moura Morta In Central Portugal
Next Post: Sand City, An Incredible Sand Sculpture Exhibition In The Algarve