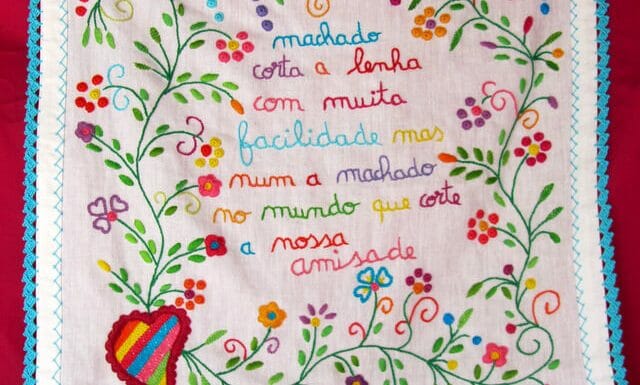 You can find these delightful pieces, or products inspired by them, in most souvenir shops in Portugal but they used to serve a practical purpose in the romantic lives of people from the Minho region.

Portuguese handkerchiefs of love as public signs of commitment

Much like a traditional valentine, these handkerchiefs were designed to ask “Will you be mine?” although they could be sent at any time of the year, not just on Valentine’s Day.

Once a girl reached marriageable age and had set her sights on a young man, she would embroider a handkerchief of love especially for him. The designs she chose were symbols of romance and their future relationship and she would usually embroider a written message or poem declaring her affections for her intended.

The young woman would know if she had successfully won him over if the man wore her handkerchief in public.

By wearing a lovers’ hanky around his neck or in his jacket pocket, especially at major events like parties and fairs, the newly committed man would let remaining single women know he was off the market. If he didn’t, the woman who made the hanky would have to get over him and start looking for a new potential husband.

Origins of the traditional embroidered hankies

The tradition of embroidering handkerchiefs with messages of devotion originated in the 17th century among aristocrats but by the 18th century it had been adapted into this courtship ritual and become part of popular culture.

The designs became more colourful and although spelling mistakes were rife, the handkerchiefs were bright, cheerful and pretty.

Although the methods of establishing a relationship have changed over the years, the craft of making these beautiful hankies is still alive, especially in northern Portugal.

There is even a committee which evaluates handkerchiefs according to a wide range of criteria including the motifs, threads, size, colours and spelling mistakes. If a hanky meets their requirements, they certify it as an approved handicraft so look out for this if you want to be sure you’re buying a quality Portuguese product.

There are usually some excellent examples available to look at, or better still buy, at the annual national handicrafts fair in Vila do Conde, just north of Porto which runs from July to August.

2012-02-13
Previous Post: Mimosa Trees, A Pretty Pest In Portugal
Next Post: Kissing In Portugal. Who, How & When Should You Cheek Kiss As A Greeting?